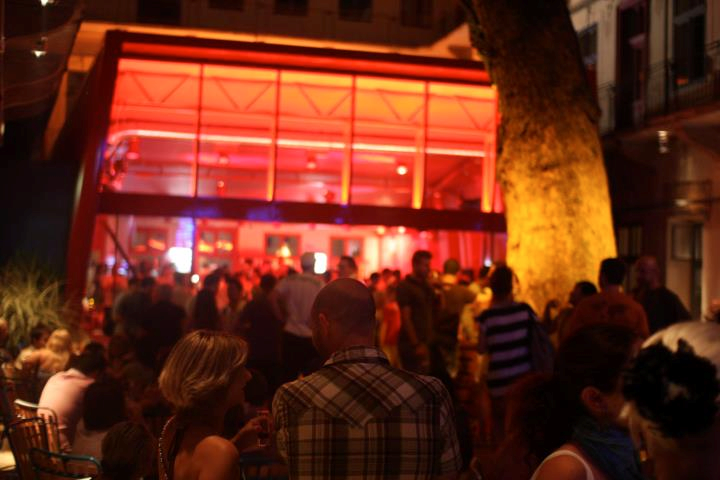 The open seating area in the courtyard, and the “DOBOZ,” where two bars and the
main dance floor is located. Picture taken August 27th, 2011.

As the summer of 2011 was coming to a close and the doom of the school year was approaching, the new and now acclaimed bar Doboz opened on Klauzál Utca in Budapest’s 7th district. Conveniently located amongst several cultural hubs between Wesselenyi Utca and Blaha Liuza Tér, Doboz is in a back street where you wouldn’t necessarily expect such a vivacious crowd. Klauzál utca is calm and unassuming until the arrival to the bar, noticeable by the bright red flags with shapes of a box (Doboz means box in Hungarian), and the often never-ending line after midnight.

Doboz opened ten years after the first “ruin” bar was established in Budapest, but differs quite a bit from places like Szimpla. The crowd is more chic, in that it’s not uncommon to see women wearing dresses and high heels, and men wearing blazers. There’s a worldly air to the place, with both students and entrepreneurs mingling amongst each other on the couches, the courtyard, the bar side and the dance floor. When entering the establishment, be prepared to have your bag checked, and mind the ramp and the large tree in the center of the courtyard, which creates a quieter and more intimate atmosphere. Depending on which side of the courtyard you choose to sit, you can either hear the lively music from the dance floor, or the more alternative, relaxed music from the back room.

The interior is one of a kind and very modern. There are high tables with barstools, high seating in the far back, and couches nearly all around the establishment, all a bold and trademark red. As you come around to the bathrooms there are stairs with box shaped couches for higher seating, as well as a sporadic high top bar area. The outer bathroom walls give an ötkert type of feeling with large masked images of women on the wall. There are no shortage of bars on either side of the club, and it doesn’t take more than a few minutes to have your order received by a bartender.

The service is fun and carefree, with the servers often dancing behind the bar and making small talk with customers. Prices are comparable to places like Szimpla, where a beer ranges around 500HUF and a bottle of sparkling wine is 2,000HUF. There is a range of music between modern electro, house, hip-hop and new wave, and rarely a bothersome tune. Open everyday of the week at 5PM, and did I mention the best part? Free entrance EVERYDAY! The venue seats about 1000 people and there is no possibility to reserve a table, however, there’s rarely a queue for entry before midnight. Though Doboz is a fairly new establishment, it is already a renowned legend of the city. I have personally come across several people who say that Doboz is the one and only place they choose to go these days on the Pest side of the city, others have called in the “new ötkert,” but better and less expensive. If you haven’t experienced it yet, make it a priority before everyone else falls in love with it! Guaranteed not to be a disappointment!