My girlfriend asked what we were going to do for Valentine’s Day on Tuesday. I did not hesitate and simply asked whether she preferred Paris or Barcelona. She was excited until I told her to meet up at a sports pub in the city center at 8pm to watch the ‘Champions League’.

Paris Saint-Germain faced FC Barcelona in the best 16 on February 14 in the Parc des Princes in Paris. The new coach, Unai Emery (former Sevilla FC coach), could finally stand up with a team which might go through Barcelona and get closer to the European glory with PSG. However, Barca was amazing last week, as they won by six goals as guests against Alaves in the Spanish ‘LaLiga’ and passed Atletico Madrid in the Spanish Cup on aggregate. These all had consequences as two right wingers (Mascherano, Aleix Vidal) got injured in the games.

On the PSG side, the whole offense was hyped, and two of them, Cavani and Di Maria, who were celebrating their birthdays, wanted to give themselves the gift of scoring against a top team. The unique ‘MSN’ (Messi, Suarez, Neymar Jr.) started in Luis Enrique’s starting eleven as usual, but right winger Sergi Roberto (who is more of an offensive midfielder) made a chance for the rivals to pass.

In the first 15 minutes, the Parisians carried out a more offensive play which then resulted in a free-kick goal by Di Maria. It put the Barca players in aggressive mood, punished by the referee with yellow cards and then running across Barcelona’s weak right wing, a 40-minute goal by the young German, Julian Draxler.

The fans would have thought after the halftime that Enrique would see the problem and change the attitude of the Barca squad. Not even 10 minutes were needed and Di Maria scored his second goal of the night. The lack of trust by the Catalan players towards their manager is clear, since he had to face three goals to see that it was time for substitution. Emery changed two players and kept on going with the offense, ultimately scoring the fourth goal in 72-minutes by the other birthday kid, Cavani, who scored his first against Barcelona.

The ‘MSN’ was ineffective throughout the whole match. Messi did not touch the ball a single time within the penalty area of the opposing team. Neymar kept complaining about every unlucky movement on the field caught by the referee. Suarez’s Latin attitude combined with being on the losing side made his performance even worse. It happened the other way around as they awaited, the Paris defense ‘disarmed’ the trio without the injured main defender, Thiago Silva, on the field. 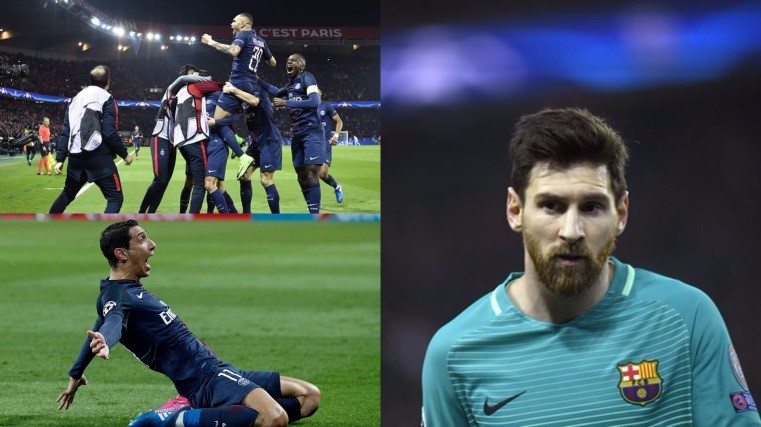 The second round of the play-off will be held at Camp Nou in Barcelona on Tuesday, March 8. It would be sensational if the Spaniards changed the aggregate score from such a huge difference of four goals. It will probably be the most important game in Luis Enrique’s coaching career, while the rumors are already spinning about the loss in confidence towards Barca’s training. The former Basque coach, Emery, has done the toughest part of the job. If the morale does not change in the PSG dressing room, then they are one step ahead towards the final in Cardiff in May.