It’s the end of an era for Blockbuster, the once hugely popular movie and video game rental store. Blockbuster announced that it finally plans to close its last 300 stores and is exiting the U.S. retail market. The company, which was at its peak during the 1990s and early 2000s, has been in decline for years, unable to compete with Netflix, Redbox, Youtube, Hulu, and other digital media sites.

Joseph Clayton, CEO of Dish Network, Blockbuster’s parent company, said “This is not an easy decision, yet consumer demand is clearly moving to digital distribution of video entertainment”. 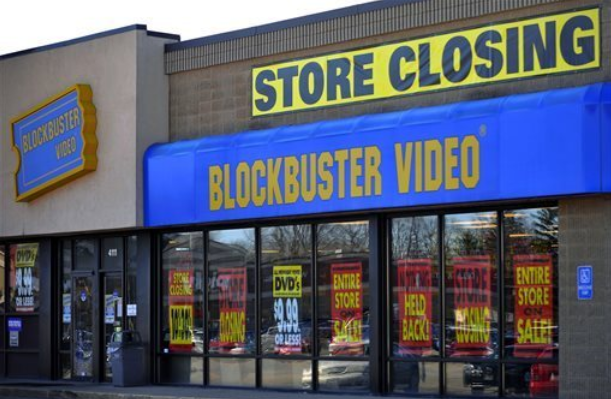 Founded in 1985, Blockbuster filled the gap between going to the movies or staying at home and watching television. The store offered movies that had not yet been released to the television networks, but had finished their run at the movie theaters. The public embraced this concept wholeheartedly and people of all ages flocked to Blockbuster regularly to rent films. Later on, the store also made video games available to rent which was popular with kids and teens. During this time, the company also incorporated the opportunity to purchase films and games. Both new and used movies and games were available. Going to Blockbuster to check out the latest movie releases was a common family outing years ago, combined with getting snacks and treats to enjoy during the movie.

In recent years, however, poor company management and lack of planning for the future have caused Blockbuster’s popularity to drop sharply. In 2004 Blockbuster had around 60,000 employees and over 9,000 stores. Today, however, only 300 stores remain and all are expected to shut down by January of next year. In addition to poor management, modern technologies such as i-Pods, tablets, Movies on Demand, and pay-per-view have eliminated the need to go to the store to watch your favorite movies. The convenience of downloading or renting movies from the Internet is more appealing to consumers than having to drive out to the store.

Like the drive-in movies of the 1950s, video rental stores such as Blockbuster will become nostalgic reminders of the past. Gone are the days of late fees and VHS tapes labeled with stickers asking customers to “be kind, please rewind”.