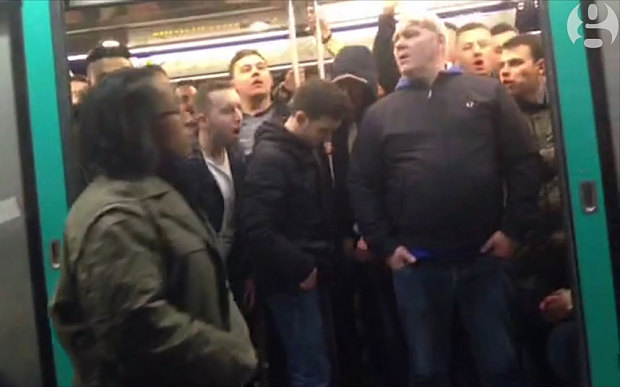 The recent racist and anti-semitic chants by fans of two notable London clubs have shown that the ball to kick racism out of football has not yet hit the back of the net.

On Tuesday, February 17, a small group of Chelsea supporters refused to let a black Paris Saint Germain fan get onto the metro after a UEFA champions League match in Paris. In addition to this, videos have also emerged showing fans of another English Club, West Ham United, appearing to be chanting anti-semitic abuse on a train in North London.


We have seen campaigns, posters and adverts at some of the biggest football tournaments asking the fans of every club to condemn racism. But when we think the whole information is going through, the information take a huge rebound like a shot hitting the crossbar over and over again.

A small group of Chelsea supporters appeared to be chanting, “We are racist and that’s the way we like it” whilst they pushed a black man away after the UCL game February 17.  As a Chelsea supporter I know the club doesn’t support any act of racism and this is an all-time low for the club after the infamous incident that happened between the club captain John Terry and Anton Ferdinand in October 2012.

New reports by the Daily Mail Sports stated that some of the West Ham United fans appeared to be chanting “I have got a foreskin, how about you? F*****g Jew”. These remarks occurred on the underground after a local London derby ended 2-2 between West Ham United and Tottenham Hotspurs on February 22.

According to BBC news, West Ham United had already warned fans before the match that “any form of discriminatory behavior” would not be tolerated. Furthermore, the message was posted from the club’s joint-chairmen, David Sullivan and David Gold. However, what does this all mean to the world of football?

While some people might see this as a step backwards, this is absolutely a step forward if you ask me. Both the racist and the anti-semitic events show that the public is well aware of the problems going on in the world of football today. Both events were captured on video by random individuals and sent to the various news websites. After hearing about the anti-semitic reports that occurred in London, a British transport police spokesman said, “We are encouraged the public has the confidence to report incidents of inappropriate and offensive football-related behavior to us”.

Investigations are being carried out in order to locate the small group of “plastic supporters”. Chelsea FC has already released a statement on their website saying “Such behavior is abhorrent and has no place in football or society.” Furthermore the club spokesman stated “we will support any criminal action and should evidence point to the involvement of Chelsea season-ticket holders or members, the club will take the strongest possible action, including banning orders”. In addition to this, West Ham United spokesman has stated that “If any individual is found to have behaved in an inappropriate way, the club’s simple zero-tolerance policy dictates that they would face the strongest possible actions including the option of life ban from the Boleyn ground”.