An Orthodox Christmas in Serbia 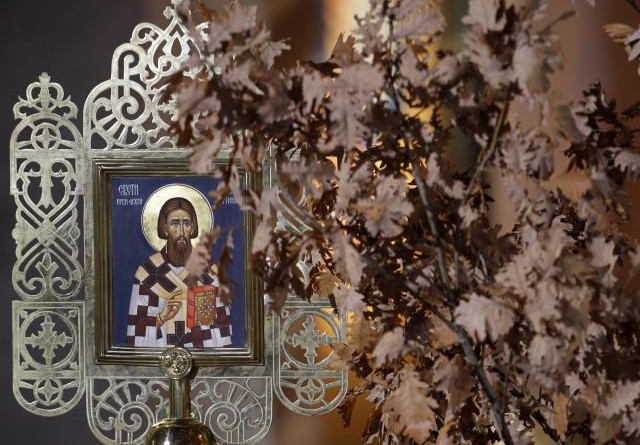 Christmas is celebrated in Serbia on January 7 according to Orthodox Christian (Julian) calendar. Christmas symbolizes the day of Christ’s birth and in Serbia it used to be celebrated together with another great Christian holiday called Theofania. The two holidays represent birth and baptism of Jesus Christ. The two were celebrated together up until the 4th century A.D. And from then on there is a cycles of Theofanian holidays which begin with Christmas (January 7th) and end with the day of Saint John the Baptist (January 20th).

Traditional Christmas celebration begins early on January 6 when men and children go to cut a Christmas tree (which in Serbia is not fir tree but oak tree). While looking for a tree, men sing old Serbian ritual songs. When the tree is found, it needs to be cut from the East side and while the man is cutting it, the other one throws grain on it so that the next year will be fertile for crops. The very important thing is that everyone is quiet when the oak tree is cut. Only small branches are taken from the tree for this ritual. The Christmas tree is called Badnjak. It symbolizes the tree of Life that God has planted with his sacred hands in Heaven and it’s also the symbol of the tree with deep roots which was planted in the womb of the Holy Virgin Mary when she gave birth to Jesus. The cult of bringing the Christmas tree to home exists in all European traditions. In most of them, fir tree is used as a Christmas tree, in Serbia, we use oak tree.

Badnjak is then brought home where it’s supposed to be burned in the stove at exactly midnight. The Christmas Eve dinner is very important and all of the members of the family are together. Serbians were fasting for 40 days and will eat meat for the first time after that period on Christmas day, January 7th. On Christmas Eve dinner the following things are served: fish, baked beans, red wine, dried fruit and candies. When the dinner is finished, the plates stay on the table all night. In that way the souls of our ancestors can eat with us as well on that festive day. Serbians have a cult of ancestor and respect them dearly. Christmas Eve is the connection between us, our ancestors and our future generation. The table can be cleaned the next morning.

Early in the morning, a woman of the house makes the Christmas Bread (Pogača). The bread is decorated with Christian motives: old Cyrillic letters, the cross, the dove (that brings peace from God) and grapes. What makes this bread special are the things that are put inside:

Before having a festive lunch with the family, in the morning, the first guest arrives. We call that person Položajnik which means the one who announces Christ’s birth. The one who usually arrives first at one’s home is a young man or woman or a child, in order to bring a good luck. Položajnik gets a gift: shirt, scarf, toys, candy etc. He is also the one who burns a part of the Christmas tree and he is singing a traditional song wishing the family health, money, success, love and prosperity.

On Christmas, people greet each other with: Hristos se rodi. (Christ is born)

And the other person is replying: Voistinu se rodi. (It is true, Christ is born)

Christmas table is full of delicious food and Serbian specialties. People laugh and joke and everybody is in the good spirit. This is the first time people are eating meat after 40 days.

Family is spinning Christmas bread 3 times saying: Mir Bože, Hristos se rodi! (Peace to God, Christ is born) and then each person is taking the piece. The Bread is not cut but each person tears his own part. The oldest man of the family takes the first part, which is for God’s glory, second is for the home and he takes the third piece for himself and then others chose their own piece. What you get in your piece of bread is what you should expect next year.