All Saint’s Day in Hungary 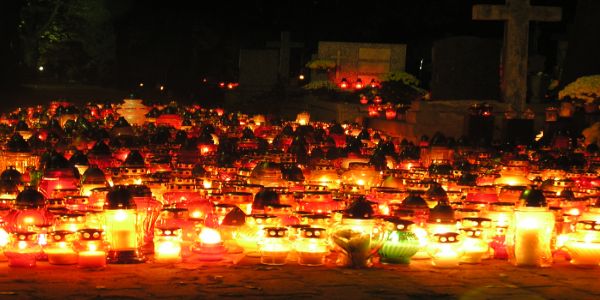 It’s only 4 o’clock, and the crepuscular rays from the setting sun are illuminating the haze amidst the Buda hillsides in shades of orange and gold. The smell of wood smoke is permeating the crowded number 59 tram as it rises, carrying most of its occupants to Farkasréti Cemetery, the second largest in Budapest. It is November the 1st, All Saint’s Day; the day many in Hungary pay their respect to their deceased loved ones. 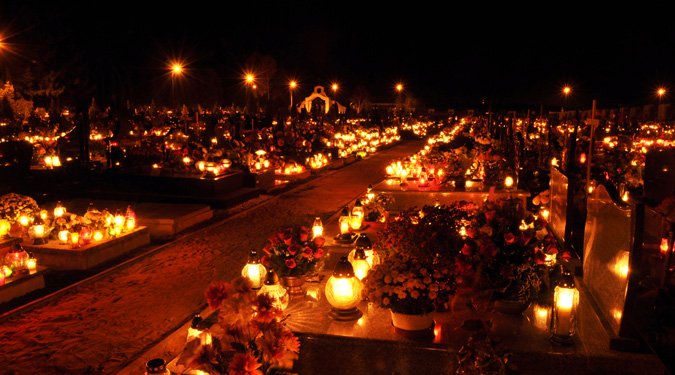 All Saint’s Day is the second day of Hallowmas, a three-day observance to remember the dead. Traditionally a Catholic holiday, it has been adapted over the centuries to be celebrated by many different cultures, religiously and secularly. The first day of Hallowmas takes place on October 31st and is know as All Hallow’s Eve. On this day it was believed that the boundary between the physical and spiritual world was weakest, and in order to avoid detection by wayward spirits who may have transgressed the boundary, people would wear costumes and disguises. In North America this tradition has continued and is more commonly known by its contraction, Hallowe’en.

All Saint’s Day was traditionally a devoted to the memory of Saints, whereas the final day of Hallowmas, All Soul’s Day, was dedicated to all dearly departed Christians. Over time the specific observance of each day eventually overlapped and it became customary to visit deceased family on either one of the days. Generally, upon visiting the graves family members would say prayers, leave flowers or wreaths and lights candles. Lighting a candle is said to help guide the soul out of the darkness of purgatory and finally ascend to heaven.

Though Hallowe’en has become one of the most popular holidays in the United States, the following days are no longer celebrated outside predominantly Catholic communities. Visiting the graves of deceased family is still practiced in areas around New Orleans, as well as in and around Catholic Mexico, where the holiday is pervasively observed as The Day of The Dead. As a primarily Catholic country, Hungary also still holds this practice extensively throughout the country.

I visited my own great-grandfather in Farkasréti Cemetary one of the most prominent in Hungary, nestled on a hillside Buda. It is the preferred burial site for writers, musicians and other artists, including such famous Hungarians as composer Béla Bartok and conductor Georg Solti. Like most cemeteries in Hungary, there is a 25-year lease on each gravesite, which must be up kept by the families of the deceased, lest they risk exhumation of their loved ones.

Directly across the gate of the cemetery, the tram almost entirely clears out, as people throng the sidewalks, requiring the assistance of half a dozen crossing guards. All the way down the block, street vendors are peddling flowers, individual and bouquets, wreaths of different sizes and many different manner of candles, encased in great and small containers of clear and crimson. For many small time florists, this event is their biggest sales day of the year.

Upon entering the gate, you are faced with a great statue of a griffin, which on this day is surrounded by dozens of people, and the many hundreds of candles the multitudes throughout the day have set at its base. Directly beyond it you are faced with a great avenue, which stretches up the hills and leads of to many smaller lanes. Parts of the cemetery are accessible by car, however drivers must have great patience for the many groups of people who saunter across these accessible lanes with their elderly and very young.

I take a smaller lane to the left, known as Musician’s Lane where the graves of the aforementioned great Hungarians are located. After a five-minute-walk I reach the grave of my great-grandfather, and wipe of the twigs off the great slab emblazoned with a crest of the 1956 Hungarian Revolution, in which many of his sons participated. After replacing these dead leaves with a great flower and a lit candle, I say a prayer.

Over the course of an hour I follow many different lanes through the hillside and observe many ways in which people commemorate their loved ones. Most come in groups of their families; couples with young children, keeping the memory of their forefathers alive in their own lineage; elderly thronged with their own children and grandchildren, continuing a tradition in which they may be passive participants someday soon. The manner in which they pay tribute differs as well, some merely leaving a candle and leaving after a prayer. Some come in great groups, surrounding the grave site, and sing songs. Others show a great measure of compassion for their loved one, coating the grave with wreaths and ribbons, leaving elaborate flower arrangements or even going so far as to landscape the site itself, leaving the departed with flowers that spring from the earth they have eternally returned to.

As I descend the hill and depart from this sacred place, the sun has already done so from this day, and the candles that guide the fields of the dead illuminate to fill the valley with a sea of flickering glows that resemble the stars these souls may one day aspire to reach.