A TALE OF TWO GREAT PLAYERS 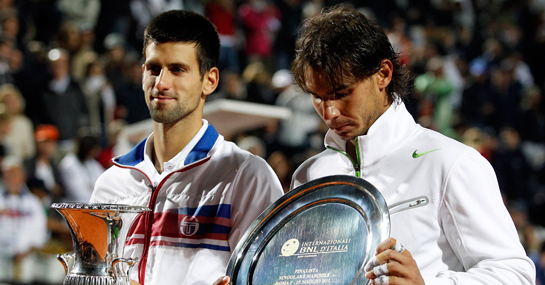 With the previously imperious Novak Djokovic and the resurgent Rafael Nadal battling for supremacy at the summit of men’s tennis, we take a look at the two men currently slugging it out at the China Open. Spaniard Rafa can knock the Serb off his number one spot if he reaches the final in China, or if Djokovic fails to claim the title.

Shahin Ghoreishi on the recent tribulations of the Super Serb

Novak Djokovic, the world number one-ranked tennis player in men’s tennis has recently appeared in two Grand Slam finals, but the difference on these occasions has been that he did not emerge as the winner.

First was this year’s Wimbledon. He fought his way to the final but it became too overwhelming for him as his competitor was British player, Andy Murray, who was in the form of his life. The Scottish Murray came out fighting and although Djokovic gave it his all, as he does in every Grand Slam event, Murray owned the court. This meant more to Murray than to any other player. Murray had lost the previous year to Roger Federer in the final and through all his efforts was left distraught, as he had the whole of Britain riding on this win. Djokovic had little chance, as Murray came out fighting stronger than ever before; he wanted this not only for himself but for his family and his nation, as they had never had a British player win Wimbledon since 1934 when Fred Perry took home the title. Murray became Britain’s first men’s singles champion at Wimbledon for 77 years. Djokovic simply failed to find the answers to Murray’s impressive array of shots.

Secondly, there was the challenge of the US Open resulting in a loss to the mighty Rafael Nadal, who is currently ranked in second place in the Emirates ATP ranking. He announced, “I was trying to remain focused throughout the tournament. I mean, I wasn’t playing my best but I know how to play throughout the whole match, because credit to my opponent, he was making me run. You know, I had my ups and downs, but this is all sport.”

Despite his recent failures, Djocovic still comes out on top with 11,120 ranking points, with Nadal standing on 10,860 and Murray on 7,075. That would appear to be quite a difference, but in reality the balance of power could change in Bejing. Djokovic is in fact the defending champion at the Chinese Open in Beijing, where he is putting his No. 1 Ranking to the test.

But Djocovic doesn’t seem to be too disheartened after his recent failures as he announced his engagement to his long-time girlfriend of 8 years, Jelena Ristic. Another high point this year came when he celebrated his 100 weeks as the world’s No. 1 in the Emirates ATP Rankings.

Could Rafael Nadal’s knee injury actually lead him to become an even better player? asks Amy Palmer, who profiles the career of Rafael Nadal through his triumphs and heartaches.

Rafael Nadal is without a doubt one of the most influential players of our generation. From his fierce forehand, to his quick feet on the court, there is not a lot that can stop this man from playing his ultimate best. Ranking as one of the top 5 tennis players since 2003, it is easy to understand why so many players fear the “King of Clay”.

Nadal began to grow a passion for tennis from the tender age of three and since then, along with the help of his uncle, has never given up his dream of becoming one of the world’s best player.

He now has 13 grand slam titles under his belt, winning his first one at the 2005 French Open. He won every single Men’s French Open title, every year, until in 2009 he had to pull out due to knee injuries, crowning none other than Roger Federer as the winner. He soon claimed back his title, and after the tournament of 2009 has won every French Open title till now.

In 2008, Nadal was faced with the occasional injury. Sadly his injuries led to him pulling out of 2009’s Wimbledon, which could have put an end to his career, according to sport scientists. He suffered tendinitis in both of his knees and the toll of that was starting to affect his game. Leading tennis coach Sven Groneveld said that he has never known a player to be so badly affected with this sort of injury at such a young age. Nadal said pulling out of the Championships two days before he was due to open play on Centre Court was the most painful decision of his career and that his tendinitis contributed to him missing out on his first French Open in years.

Nadal never had an operation to repair his tendinitis and decided to use the method of rest and intense therapy, a decision which has ultimately benefited his career.

In 2010 he came back strong winning his second Wimbledon final and claiming his first ever US Open title, making that along with his consecutive wins at the French Open, 3 grand slam titles in 2010.

In 2011, Nadal began to slow down his game, and started losing his cool. He may have won the French Open that year but he lost every other Mens Final in each Grand Slam tournaments, to his new “frenemy”; Novak Djokovic.

In 2012, the two champions faced each other yet again head to head, in the Australian and French Opens, both claiming one victory a piece. The next time these two crashed rackets was this year, in the 2013 US Open. Nadal said to ESPN reporters that he never liked to compare years, but that this year meant more to him than any other year, as he felt that he and his team could never have made a comeback quite like this, as there were fears that his injuries could have gotten worse. With all odds piling up against him, it is incredible to think that he thrashed his way to victory, beating his critics and Djokovic to the title.

Nadal is a force that cannot be stopped and he seems to have no intention of slowing down. His greatest alley is his forehand, which many great players may never even master. He is a born champion and will forever be one of the best players in the history of tennis; a true athlete and a force of nature.