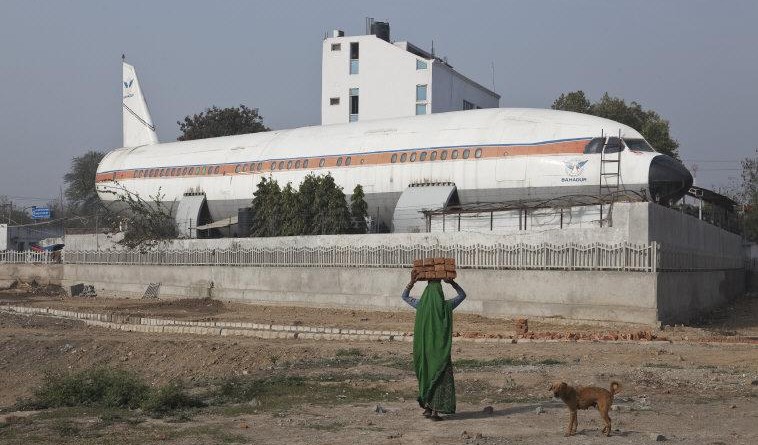 A man in Delhi makes flying a reality for those who usually see a plane from far down below. For those who cannot afford a ‘real’ ticket, this may be the experience of a life-time.

‘Namaste’ – the young flight attendant greets every passenger with a big smile. There are no men in suits on this flight, nor are there women with the latest designer bags. This flight is special. The passengers are now seated and the flight attendant asks for attention during the safety demonstration. Everyone is quiet and carefully observes every move – the oxygen mask, the swimming-vest. It is an unusual picture: most people have stopped paying attention to these demonstrations as flights have become a part of their life. But there’s still 97% of the 1.2 billion Indian population that has never been on a plane and simply cannot afford a ticket to go up into the sky – and this is their flight.

A man in New Delhi came up with the marvelous, and for some maybe strange, idea. ‘This is your captain, welcome on this flight from Delhi to Mumbai’. But this plane is not going to fly to Mumbai today, in fact, it will never move at all. It is placed in a suburb of Delhi, in the middle of a housing colony, to give the poor a glimpse of what it is like to be on a plane.

Bahadur Chand Gupta, the owner of the plane, was born in a small village and has seen poverty first hand. He became an airplane engineer and through his job he got to fly for the first time. His friends back home asked him to take them along, but obviously he was not allowed to do so. Gupta felt awful and once he retired, he decided to buy an old plane to show those that cannot afford it what flying is like – for free. Now the plane is in his garden and every once in a while he gets into the cockpit to welcome a group of underprivileged citizens. The offer is popular and the people love it.

When one man is asked at the ‘check-in’ why he wants to get on the plane, he says that it has always been his dream to fly and he wonders all the time what a plane looks like from inside. He hopes that he can save up enough money to one day travel by plane with his entire family.

I am touched and I wonder what it must be like to simply not have the chance to hop on a plane whenever I feel like. While Delhi is experiencing an economic boom and the average citizen of Delhi earns around 800$/month, a quarter of the country is still earning less than 15$/month. I am reminded of all I have, and of how privileged I am. 15$, that’s usually what I spend on food at the airport.