2014: the year Hungarians rose up and cast off a history of quiet resignation 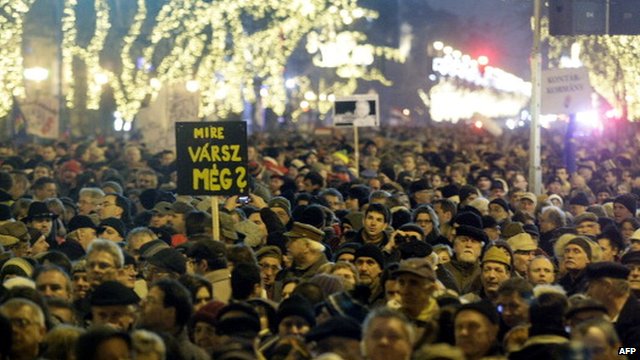 2014 turned out to a big year for protests, from Hong Kong, to Ferguson, Missouri, but also here in Hungary. During a single protest in Budapest, almost 100,000 people, stretching over a kilometer from one end of the Elizabeth Bridge all the way back to Astoria, hit the streets to express their opposition to a proposed Internet-tax. Though the current administration is known for not backing down, the largest protest they’ve faced so far certainly made an impact, resulting in the tax proposition being repealed less than a week later. Despite this victory the protests continue. After realizing their voices can make a difference, the people continue to express their discontent about the current government’s policies, especially against the pervasive corruption that many argue contribute to the necessity for such highs taxes. In any case, as these protests continue, let’s look back at historical examples of Hungarian discontent and resignation.

The Hungarian Revolution of 1848

One of the many revolutions sweeping Europe in the Spring of 1848, the Hungarian Revolution was instigated by Hungarian liberals, who wished to reform and democratize Hungary within the Habsburg’s Austrian Empire but escalated into a full-on war for independence from the Empire to create a separate country out of the Kingdom of Hungary. On March 15, 1948 mass demonstrations took place, inspired by radical students and Sandor Petofi reading his famous poem, Nemzeti Dal, beseeching the Hungarian people to be slaves no longer. A new government was put into place enacting laws the established Hungary’s autonomy, but which did the Emperor not accept. The subsequent war lasted into the next year, and saw the nationalists Hungarians’ dreams crushed by the Austrian army, mainly due to the greatly supplemental forces of Russia. Within 20 years however, the Empire granted Hungary near equal status, and the renamed Austro-Hungarian Empire lasted until the end of WWI

The Hungarian Revolution of 1956

Hungary had the unfortunate distinction of being occupied by the Soviet Russians after WWII, resulting in the creation of a Socialist state, led by a Communist dictatorship, in 1949. But within 7 years, the Hungarians grew frustrated by the intolerable plight of foreign-imposed dictatorship. On November, 7 1956, a mass-students demonstration marched to the Parliament building and the radio building with the intention of broadcasting their demands. When the students were detained and the crowd outside demanded their release, they were fired upon from the tops of the surrounding buildings resulting in the eruption of revolution by the people, which quickly spread throughout the city and across the country. The people would effectively claim the city after days of intense fighting, only to have their rebellion crushed by incoming Soviet tanks a week later. The loss led to mass migrations of Hungarians across the world, mainly to Australia and the United States. However, the impact was not insignificant, as the Soviet leaders were fearful of another sort of uprising they allowed Hungary a looser enforcement of their policies, known as “Goulash Communism,” making the Hungarian Socialist government the least harsh of those in the Warsaw Pact.

Months prior to the 50th Anniversary of the Hungarian Revolution, a tape leaked of Hungarian Prime Minister Ferenc Gyurcsany, telling his party that they had been lying to the people and that this lying needed to stop. Outraged by this, many people used the symbolic anniversary of the revolution to take to the streets and express their disapproval of the Prime Minister and his government. They were met by mounted-riot police, tear gas and rubber bullets, resulting in many injuries. The legacy of this event led to the breakdown of support for the ruling party at the time, allowing for the overwhelming victory of the oppositional party, who won a landslide 2/3 majority in the elections of 2010. Unfortunately, this majority has given them overwhelming power, allowing them to re-write the constitution and change election laws, which greatly contributed to their victory in the past elections earlier this year.